Lea Anderson, a San Diego native, has lived and worked in the New Mexico art community since 2003 and has discovered much during her adventures in the dramatic, colorful, and wild desert environment. Fluent in both two-and three-dimensional visual languages, she creates living, philosophical worlds that echo the formal variations seen in biological systems. These themes are explored through individual works as well as full-scale ambitious mixed media installations using a wide variety of both traditional and digital media. She has exhibited throughout New Mexico and the United States, as well as internationally in Bangkok, Chang Mai, and Chang Rai, Thailand. She created a monumental installation piece for the Atrium windows of the Albuquerque Museum as their 2015 Summer Artist-in-Residence. In 2017 Anderson also completed artist’s Residencies at Bullseye Glass Resource Center in Santa Fe and at the Vermont Studio Center. 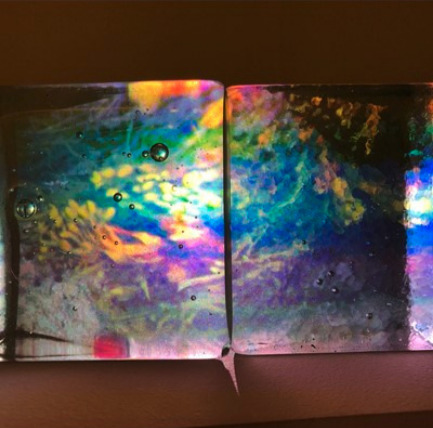 Susanna Carlisle and Bruce Hamilton are new media artists with backgrounds in video, sculpture, architecture, and computer programming. Their recent work has addressed environmental concerns such as the vulnerability and destruction of the natural world and the built environment due to climate change, natural disaster and man's impact on the environment. Their architectural projects, computer designed sculptures, single channel videos, video sculptures, and installations have been exhibited in the US, Europe, Asia, and Australia. They have received grants from the State of New Mexico, the National Endowment for the Arts, Albuquerque 1% for the Arts, and a fellowship from the New Mexico Experimental Glass Workshop. 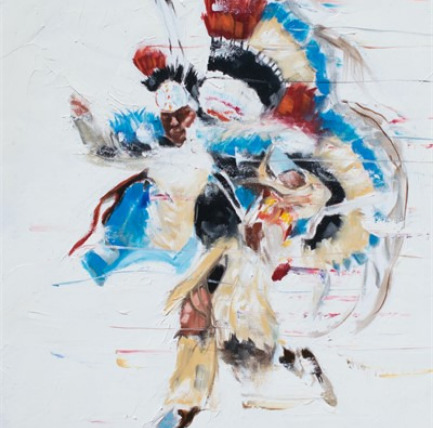 Best known for his work with Apsaalooke’ (Crow Nation of Montana) imagery and cultural meaning, Del Curfman explores heritage, tradition, and humanity through painting. His work often incorporates techniques and styles of impressionism. With loose brushwork and semi-abstraction he captures the essence of nature. Obtaining his BFA in Studio Arts with a focus on painting at the Institute of American Indian Arts of Santa Fe, NM (IAIA) in May 2017, emerging artist and enrolled tribal member, Curfman looks to contribute to contemporary Native Artist history through his work in oil paints and community based projects. 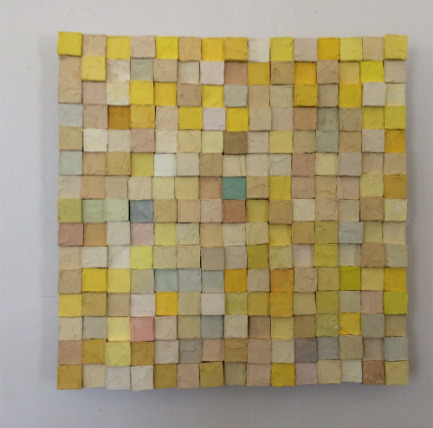 Originally from Mexico and currently living in New Mexico, Carlos Estrada-Vega continues to explore the relationships between color and the geometric shapes. His paintings consist of small wooden shapes typically no larger than one to three inches. These units are then individually painted with the artist’s proprietary mixture of oil, limestone dust, and pigment. Magnets are inserted into the backs of each of these “mini-paintings,” which allows them to be attached to a large, unifying steel plate. Once assembled, these orchestrations of color - in some cases incorporating thousands of tiny shapes - become “organic” cohesive grids, playfully inducing sensory overload, satiating you with the pure joy of truly experiencing color. 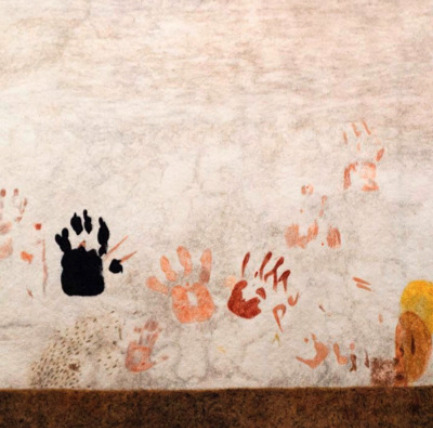 Gary Goldberg is a professor of Art at Midwestern State University, where he has taught for 35 years. He has served the University as Interim Chair of the Juanita & Ralph Harvey School of Visual Arts and is currently Director of the Juanita Harvey Art Gallery. He received a MFA from the University of Nebraska. Professor Goldberg has been awarded a grant from the Rotary Foundation international exchange program, through which he traveled to India. He has also been the recipient of an Emerging Artist Grant from the National Endowment for the Arts. During his years at MSU, Professor Goldberg has earned 15 university research grants and one developmental leave. Goldberg’s photographs have been included in over one hundred exhibitions and publications throughout his career. 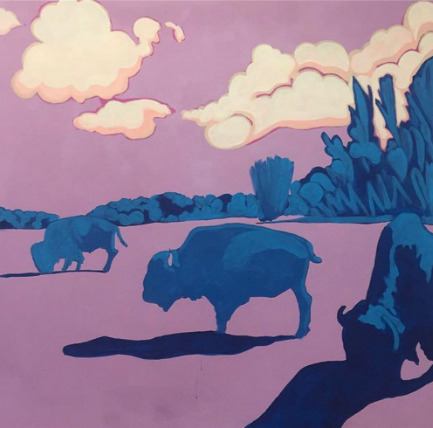 Hyde creates satirical, graphic paintings, at once humorous and acerbic, that meld the collective unconscious of the 21st century with his Native American heritage. He transforms street art techniques like stenciling into fine art practices. His explosively colorful, bold works powerfully jolt viewers to consider the miscommunication of cultures. Hyde says, “In the age of the internet, if I can make the viewer slow down for longer than five seconds or create conversation then I have done my job.” 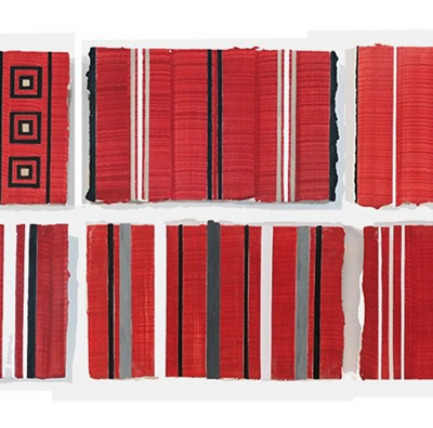 Moira Kelly studied Fine Art and Art History at the University of Newcastle on Tyne and graduated with Honors. She was hired by Spencer A. Samuels and Company in New York City as a head of paintings restoration. She has worked on paintings owned by the Metropolitan Museum of Art, the Art Institute of Chicago and the Frick Collection as well as in private collections. She has remained active in art conservation and has made a study of artists' materials and techniques. 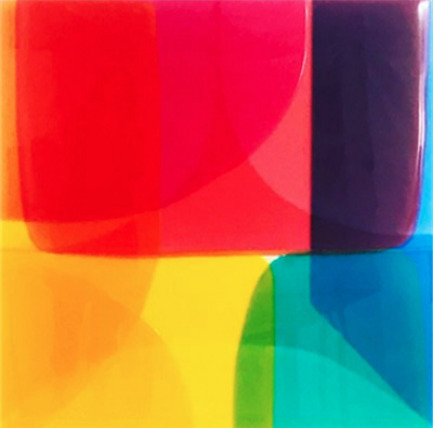 "I manipulate tinted epoxy resin to create abstractions. I begin each piece by choosing the colors. The colors reflect a feeling but can also impact my emotional self. As I pour, a form begins to appear on the surface and a dialogue begins. These forms are similar to characters in a play. They speak to me and guide me to create their shape. Eventually, they interact and engage with one another. There is an unpsoken language between them, one I cannot hear but instead, feel. The language has an emotional value that taps into a different part of our brain. The challenge in creating this type of abstraction is leaving the emotion unidentified. With each artwork, my intent is to create an expereince. I allow the viewer to think, feel and find their unique signifcant meaning" 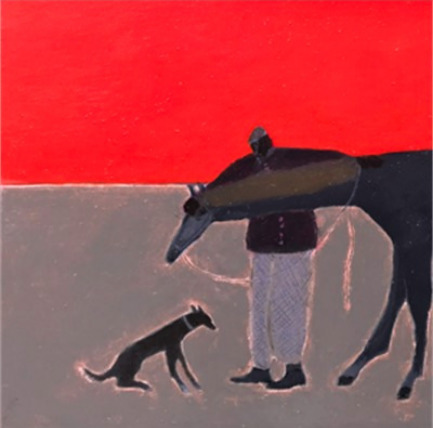 Santa Fe artist Gigi Mills merely references the physical world. Her beaches, seasides, and interiors are placed in an impossible mixture of points of view, resulting in truly imaginary spaces. An attention to flat geometric shapes, a rarity of detail, and a tendency to define her figures as silhouettes lends anonymity to her subjects. Mills deconstructs the everyday, then surprises by uniting layers of rich oils to capture ethereal images that are both intensely personal and timeless. The reduction of forms to a simplified elegance is essential to her paintings. Working in oil, sometimes glazing to force the light to pass through many thin layers of paint she sometimes scratches the surface or digs out small chunks of paint in order to reveal a little of the history of a piece. No matter what her current technique, style or subject matter, it is always Mill’s foremost intention to create work of extraordinary beauty, elegance, and restraint. With a personal history of having been raised amongst the Mills Brothers’ Circus and a former life as a Ballet dancer, characters in performance mode are common themes in her work. Often working out narratives within a series, her work always provides a rich and magical tale. Gigi has a BFA in Theatre from the College of Santa Fe, NM and an MA in Choreography from the University of New Mexico in Albuquerque. Her training results in an awareness of gesture and performance. Interestingly, many of her paintings present themselves as stage sets, where the figures and interiors are conspicuously on display. With all of their grace or awkwardness they face and confront the viewer. Gigi Mills has exhibited throughout the US, Italy, France and in China, where she was a visiting artist in Zhangjiajie in 2009. 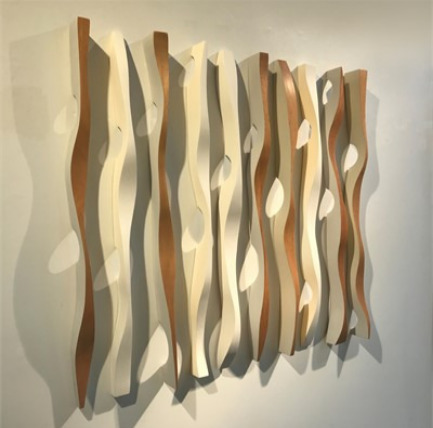 Pascal Pierme is a Frenchman who settled in Santa Fe in 1997. Prior to that time, he had gained a European reputation as a promising young sculptor. He fielded a series of solo exhibitions in France and Switzerland, and worked on collaborative projects with Pierre Cardin and others. Pascal's career has blossomed in America. He has been awarded several commissions for large-scale installations. Galleries and collectors alike have responded to the simplicity of his approach, which balances geometric abstraction with organic form. There is an undertone of symbolism as well, a hieroglyphic shorthand that hints at other visual languages. Pascal was influenced from a very young age by his grandfather, a wood sculptor. It was from him that Pascal developed his love for wood and his passion for working with it. He creates an extraordinary range of abstract meditations that seem to arise directly from the material itself, rather than from a conscious plan. He has an extraordinary rapport with his materials, concocting his own varnishes and resins as well as creating bronze-like patinas on non-metallic surfaces. He works with a variety of precious woods and creates sculptures that express the texture, aroma, and strength of each. He considers wood to be a feminine material - warm, colorful, full of surprises, and not always easy to control. Therefore, many of his sculptures have a feminine cast, with elegantly swelling contours and subtle curves. Conversely, he sometimes works with more angular, masculine themes, such as his Fleche (Arrow) series, and the wood responds with a robust presence. Pascal's technique is interactive. Each work of art is characterized by a graceful balance, a meticulous attention to detail. Even as he carves and burnishes, he allows the piece to guide him. 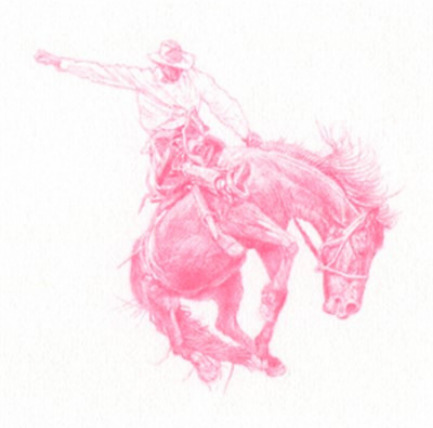 Clayton Porter (b. 1980) is an American multimedia artist living and working in the southwestern United States. He grew up in Colorado Springs, CO, spending his early childhood on the rural front-range, moving to the city proper with his mother when he was six. Porter earned a BFA in mixed media at the former College of Santa Fe; with an emphasis in photography; and a minor in art history.
One of the most significant turning points in Porter’s life was the untimely death of his mother when he was still a teenager. This event, plus the subsequent death of his father fifteen years later, deeply influenced the formation of his artistic narrative.
Porter credits some of the conceptual underpinnings of his work to his proximity to the artist Bruce Nauman. Working tangentially for Nauman’s studio for eight years, he developed a heightened critical approach to his studio practice. The topics Porter touches upon are often as wide ranging and as varied as the media he employs. Porter’s work can be interpreted as irreverent, and although he never shies away from utilizing humor, his motivations can often be traced back to feelings of nostalgic longing, contemplations on material impermanence, and pitfalls of masculine identity. Outside of his full time studio practice, Porter is also a contributor to the Santa Fe, NM-based arts and culture publication The Magazine. 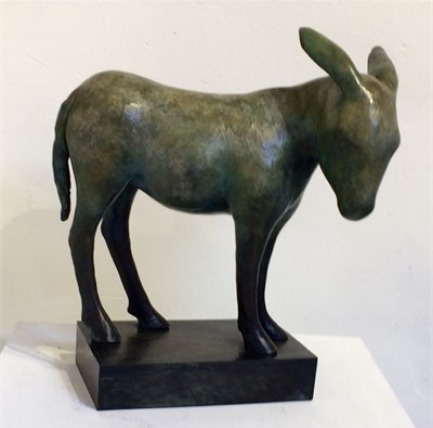 Copper Tritscheller, a native of Georgia, was a Philosophy Major at Georgia State University. A self-taught sculptor, Copper did not originally pursue a career in art. Instead, she spent 21 years raising children and building a successful sales company in Connecticut. Her artistic side showed itself in various ways over the years; she architected her home, designed her own furniture and even created a children's craft line.
It wasn't until she met a local sculptor in 2000, that she was formally introduced to the art world. In 2002 she sold her company, invested in the artist and spent the next eight years running his business. But Copper wasn't content to just sit in the office. With her keen eye for color, she excelled as a patinatorand quickly became responsible for all the patinations.

We are most likely to accept offers less than 10%.

You will receive an email confirmation